It’s been quite the year, to have disappeared from blogging and reading for such a long time. I wish I could blame it all on the crazy that’s been happening worldwide and thensome, but I also did a lot of moving this year, so for a few weeks, I didn’t even have any of my books handy to read (not that I had been in a mood for a long while…).

Anyway, I decided that because I didn’t have much content at the moment, I was going to start my blog back up and in gear with talks of FOOD!

And quite possibly one of my current obsessions of the year: Dr. Stone and cookies. 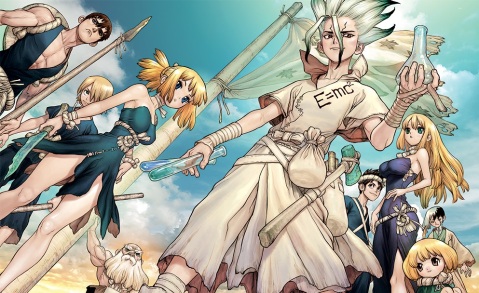 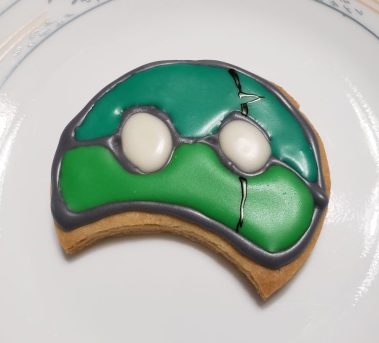 So during the summer lockdown, I ended up getting re-hooked into anime, and pretty much almost binged Dr. Stone within the first few weeks of my watching it (which, if you know me well, you’d know I don’t really binge very often). I was just too addicted to the whole science bits of the show, and I even use some of it to teach my students (much to their consternation, tee hee!).

But I’m not the only fan, it looks like, because honestly, I was recommended this anime by my sister and two other family friends; one whose birthday conveniently fell around the time I wanted to make these cookies in the first place.

The premise of Dr. Stone is that the world becomes petrified by some strange scientific phenomenon, only for characters to become de-petrified 3000+ years later. Luckily for the world, Senku–a genius high school savant–manages to wake from this petrification, and his sole goal in the story is to save the world through the power of science. It’s so cheesy when you look at it, but SO GOOD AT THE SAME TIME.

One of the characters in the show wears a melon for a head and spends most of the season as a melon-head, hence the name Suika. She was just the perfect thing to put on a cookie, especially since I haven’t decorated one at length in such a long time!

The recipe for the sugar cookie itself was something I had found, and a little different from how I usually made sugar cookies. This is a good thing, because I actually liked how the shape came out after removing the batches from the oven. I did have to improvise a bit to give that almost crescent shape on Suika’s melon mask.

Once I got the shape going with the dough, and once I was sure the cookies were hardened enough, I began Phase Two of the decorating! Thankfully, I got some pointers from a friend–whose decorating skills are LEGIT–and I figure, might as well put her tips–and my watching too many piping videos on YouTube–to good use. 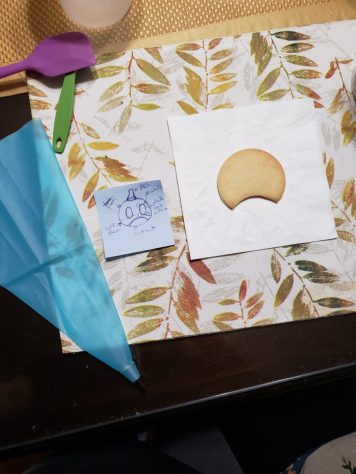 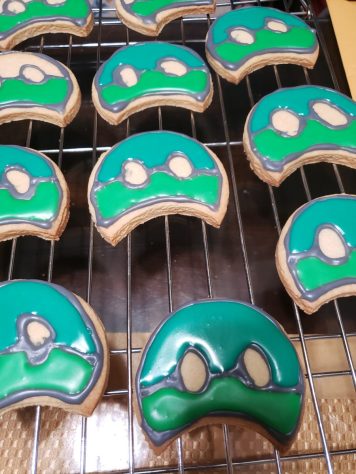 I did end up running into some piping problems, one of which was outlining Suika’s face on the cookie. I probably could have used a white outline instead, which might have worked better, so the lack of outline smoothness wasn’t so blatant. That said, flooding the cookies at the end were kind of fun! And I did like using two different green tones for the top and bottom, even though I probably could have gotten away with using just one. The only thing I was hoping I could have added was the top of the melon head, but alas. My skills do not go that far! 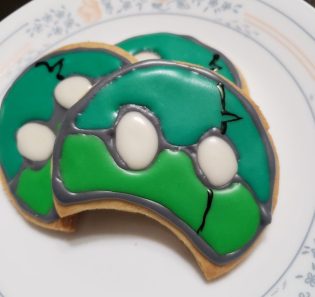 All the same, the verdict was a positive one! Because I used meringue powder in the icing, I didn’t run into too much of an issue of the cookie drying quickly. They were dried within minutes and stackable within 30 minutes to an hour. I don’t recommend stacking them for too long, obviously, but they were easy to pull apart even when they did get a little stuck to each other. I do love the recipe, though, and I’d make the sugar cookies again!