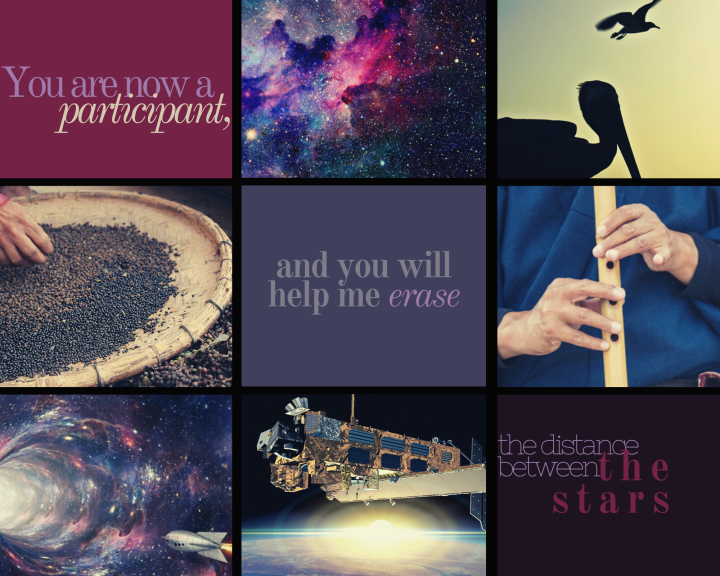 Nia Imani is a woman out of place and outside of time. Decades of travel through the stars are condensed into mere months for her, though the years continue to march steadily onward for everyone she has ever known. Her friends and lovers have aged past her; all she has left is work. Alone and adrift, she lives only for the next paycheck, until the day she meets a mysterious boy, fallen from the sky.

A boy, broken by his past.

The scarred child does not speak, his only form of communication the beautiful and haunting music he plays on an old wooden flute. Captured by his songs and their strange, immediate connection, Nia decides to take the boy in. And over years of starlit travel, these two outsiders discover in each other the things they lack. For him, a home, a place of love and safety. For her, an anchor to the world outside of herself.

For both of them, a family.

But Nia is not the only one who wants the boy. The past hungers for him, and when it catches up, it threatens to tear this makeshift family apart.

I seem to remember having read the summary on Netgalley and thinking, “Oooh, this one’s an interesting sci-fi premise!” At the time of my request, I was getting tired of reading YA or fantasy books and had been hitting the scifi wagon really hard. But then at some point I switched it up again and returned to fantasy. So it took months for me to finally pick this copy up and actually read.

By that point, I had no recollection of what this book was actually about, and started reading it with no immediate expectations.

Alright, Jimenez, so that’s where you’re taking this, huh?

The Vanished Birds is an interesting mix of science fiction and fantasy, playing with the aspect of time relating to space travel. It is an investigation of how people interact between the traveling being done–the story begins even way before the actual plotline, with Nia and a relationship she strikes up with Kaeda, which is maintained 15 years at a time.

“Your death is certain. Nothing will change that. You only prolong the pain with your stubbornness. Unless you can break the sky, what use is there in remaining?”…

“Then I will break the sky,” he said.

The meat of the story actually starts when a boy mysteriously crashes into Umbai V, Kaeda’s home planet. When the villagers refuse to keep him–despite Kaeda’s attempt to do so–this boy is delivered to Nia, who agrees to take him on her ship The Debbie to drop him off at the next space station. It should have been a clear-cut mission, and Nia would have liked nothing more than just to cut and run, but relationships are tricky, and her interactions with Kaeda–and then the boy–change everything.

We are also introduced to the creator of the many satellites in space, including Pelican, Nia’s destination. Fumiko Nakajima was a brilliant engineer, and she successfully designed several stations that became sustainable in space. Celebrated and revered, she is cryogenically frozen for years on end, so that even in the thousand years that has passed, Fumiko is no older than a few years since she started designing for the Umbai company.

At first I wasn’t sure where all of this connected to, and why the boy was so important, but with this book, things start coming to light pretty quickly, and once Nia arrives at Pelican, the plot definitely gets rolling. Fumiko gives Nia a contract she does not refuse; and while both women have different motives for the mission (Fumiko’s search for time and space Jumpers and Nia’s desire to stay with Ahro), they move toward the same goal–to keep Ahro from Umbai territory by hiding out in Pocket Space for 15 years.

That’s not to say that this book is very plot-heavy. If anything, it’s very relationship, people heavy. A lot of the writing focused on the characters, especially Ahro and Nia, Fumiko and Dana. From time to time the chapters segue into other people’s points of view (Sonja, Gorlen, Elby, Ahro, to name the few…), and this wasn’t necessarily a bad thing! I actually liked the addition of how the different characters felt through their interactions with people. A lot of the worldbuilding could actually be seen through the telling in each characters’ POVs. A lot of the plot also gets mixed into this, especially since there were characters outside of Nia’s and Fumiko’s realm that had other ulterior motives. There is some betrayal and action involved, and there was definitely a point in the plot where a “villain” emerges. But plot definitely took a back seat on this story.

“They could take my day,” he said–leaned forward, just a bit–“but I’d still have the night.”

The Vanished Birds is ultimately a lyrical novel about the intricacies of passing time and traveling an epic distance through space. A lot of the characters feel this change of time and distance acutely, either through a sort of motion-sickness symptoms, or mentally and emotionally. With how Jimenez wrote, the story was beautifully described, and it hit the right amount of exposition to keep a vivid picture in the reader’s mind of how the different settings look.

Honestly, I haven’t felt so pumped about having read literary prose in a while. I’m glad that when I did, it was in the science fiction genre!

5 out of 5 cookies! I definitely recommend, especially if you’re a fan of space and time travel and, well, interactions with people.