Happy Christmas Eve! I’m practically trying to do last-minute baking today, so not much reading lately, but I do have some end-of-the-year stuff to sort out before January gets away from me again!

Of course, most of my blogging end-of-year things are book reviews. But what else is new?

For all intents and purposes, this book scratched a fairy tale itch I haven’t had in a long while. And I read it in roughly two sittings. It was a fast-paced, fairy-tale traipse through the Wildwood and really just light-hearted fun…even when everyone around Cerys was just decaying into zombie tree demons. Ahem. ANYWAY. I do have lingering questions and things seemed rushed at the end…but ya know.

AMONG THE BEASTS AND BRIARS 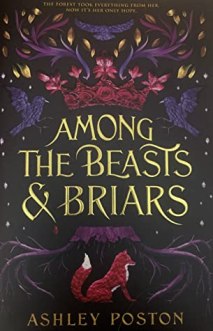 Cerys is safe in the kingdom of Aloriya.

Here there are no droughts, disease, or famine, and peace is everlasting. It has been this way for hundreds of years, since the first king made a bargain with the Lady who ruled the forest that borders the kingdom. But as Aloriya prospered, the woods grew dark, cursed, and forbidden. Cerys knows this all too well: when she was young, she barely escaped as the woods killed her friends and her mother. Now Cerys carries a small bit of the curse—the magic—in her blood, a reminder of the day she lost everything. The most danger she faces now, as a gardener’s daughter, is the annoying fox who stalks the royal gardens and won’t leave her alone.

As a new queen is crowned, however, things long hidden in the woods descend on the kingdom itself. Cerys is forced on the run, her only companions the small fox from the garden, a strange and powerful bear, and the magic in her veins. It’s up to her to find the legendary Lady of the Wilds and beg for a way to save her home. But the road is darker and more dangerous than she knows, and as secrets from the past are uncovered amid the teeth and roots of the forest, it’s going to take everything she has just to survive. 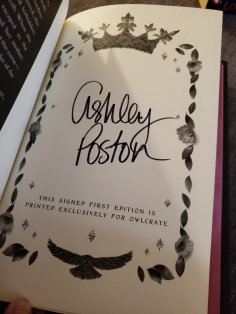 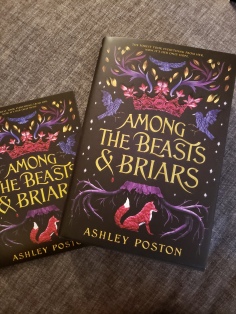 Ahem, anyway. Enough about my OwlCrate and more about the book.

So I’ve read Ashley Poston before, and OwlCrate did do a box for Poston’s sci-fi novel, Heart of Iron, but I know her mostly because of her Geekerella stuff, which I have fallen in love with. Bookish and the Beast is on my TBR because of how much I loved the world she built around fandom, science fiction, and pop culture. Also, I love Darien and Elle and I stan them every step of the way.

Among the Beasts and Briars is Poston branching into fantasy, and I’m actually pretty chuffed that she did! I liked this book, though for a YA installment, it’s actually much tamer than I thought. Maybe because I’ve been spoiled now with all the steamy YA (*coughMaasLuBardugocough*), the romance here didn’t exactly send me to puddles. And it should have, because I mean…fire-starting missing princes and the like…

The book did get me invested from the beginning, though. I think the premise that everything the people in the kingdom of Sunder thought about their history was a lie had me already guessing the actual truth to the matter. I liked the idea of evil in the woods (because why not), and the whole book itself was very old-school fairy tale.

That did mean that the plot itself became just a tad bit predictable. And from time to time, I wish there had been something surprising that showed up in the end. Alas, things get tied up well, and while there may not have been a wedding at the end of the “happily ever after,” there’s a dance, a coronation, and a surviving tree-zombie.

I did enjoy the characters. Cerys and Fox kind of reminded me of Sophie and Howl, respectively, and they also had some Beauty and the Beast vibes (but with a title like Among the Beasts and Briars, how could it not?). I mean, Fox’s human form is pretty much what Howl looks like, and they’re both pretty much divas when it comes to the important things, hah!

For a fast-paced, straightforward fairy tale, this is definitely something I would recommend. It came at about the right time, when I was in the middle of several profound reads, so getting something that was just fun for fun’s sake was welcoming.
3.5 out of 5 cookies! It’s something I would read to fifth and sixth graders for sure.