There really should be some sort of way to gauge pages with Webtoons, because getting through 58 “episodes” of Midnight Poppy Land in two sittings felt like getting through a 200-something page book. It was addicting, albeit in graphic novel form, and the only reason I’ve even put it down is because Lilydusk has decided to take a hiatus. (Good on her for that break! But gaaaah, do I want season 2!)

All the same, I need a new Webtoon to get addicted to, but I also probably need to get through my pile of books I’m currently reading…

The other book, The Water Dancer, was an audiobook I’d listened to during my #24in48 spree last February. Wasn’t bad to listen to, even with the whole magical realism thing, but I think it could have just been a non-magical book and it would have moved just the same. Bit of a slow plot, though. 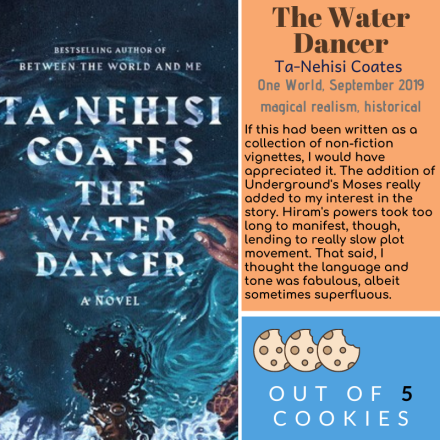 Have you read either of these? What did you think?

So I only purchased the first book to try out, and I kind of want the entire collection now so I kinda regret testing the waters, but I really don't need to blow more of my book budget when I'm doing a great enough job doing that on special editions. SO. I guess we're putting my library system to work! Already placed a request on books 4 and 5 since I'll probably get book 3 done today 🤣
Impromptu Little Ferry trip! Why not hit Cast Iron, Daiso, AND Tiger Sugar all on the same day?