With all the fantasy I’d been ingesting lately, I was due for something out of my comfort zone, amIright? Well, fine, I just thought the cover was cool (though I’m not sure why this cover makes any sense toward the actual story, since the only stretch I can find is that raven = death). Oh, and I thought: “this sounds like a pretty scary story…LET’S TRY IT!”

Did I mention I’m out of my comfort zone here? Did I also mention that I’m not exactly fond of ghost stories?

THE GIRL FROM THE WELL

A dead girl walks the streets.

She hunts murderers. Child killers, much like the man who threw her body down a well three hundred years ago.

And when a strange boy bearing stranger tattoos moves into the neighborhood so, she discovers, does something else. And soon both will be drawn into the world of eerie doll rituals and dark Shinto exorcisms that will take them from American suburbia to the remote valleys and shrines of Aomori, Japan.

Because the boy has a terrifying secret – one that would just kill to get out.

So I’m not a horror movie kind of girl, and not because I’m generally scared of them. I hate slasher films because of its glut of gore (which is weird, because I have no problems watching crime serials like Criminal Minds lol). I have no patience for teen scream movies because they tend to be hypersexualized and everybody is pretty much scripted to “get what’s coming” to them (I’m sure there are exceptions).

But then we get to the supernatural films, the things like The Exorcist or The Grudge, and even The Woman in Black had its moments. Those things scare the living bejesus out of me. From what I’d seen being said about The Girl from the Well in the blogging circuits and from the jacket summary, it combines many of the few things I’m royally creeped out over: ghost stories, dolls, and Japanese horror films.

I wasn’t seeing so much Dexter in this book, though. If I was going to describe it, I’d say it was a mix of Ringu (Ring) and the anime Jigoku Shoujo (Hellgirl). Ringu utilized the image of a famed Japanese ghost (the Okiku of legends, as it were), while Jigoku Shoujo perpetrated a girl who’d sold her soul to the devil in order to wreak vengeance on the mortal wicked. I haven’t seen Ringu or its American counterpart, The Ring, but I have seen Jigoku Shoujo and Okiku–her presence on Earth, her thirst for vengeance, even her occasional girly-cutesyness (according to Tark)–really does remind me of Enma Ai.

Okiku herself is an interesting ghost. She tended to do a lot of observing when it comes to the bad guys who hurt children, but her interest perks up when a boy with strange tattoos show up in Applegate (the place Okiku is currently wandering). She is an old ghost, though her death was when she turned sixteen. So in Tark’s–and Sandra’s eyes–she occasionally shows up as the girl in white.

(Occasionally she shows up like the girl from Ringu but I swear she does this to scare the damn murderers and child rapists…and to troll Callie, lol).

So anyway, the book. The Girl from the Well worked well on the scary department, especially with the whole vengeance angle. I was thoroughly paranoid and scared from the beginning of the story. Throw in the creepy dolls and creepy hyper-perceptive children and the creepy serial child murdering rapist and damn. I just COULD NOT.

But admittedly, it was the dolls that clinched the scare-factor for me.

“It is because this one is already possessed by a spirit. It is the spirit’s eyes that you see, looking out at the world.”

Tarquin nearly drops the doll. Hastily, he shoves it back into the miko’s arms. He is trembling a little. “This is why boys don’t play with dolls. Now if you don’t mind, I’m going to go and freak out in the next room.”

Seriously, you and me both, Tark. I can never look at a doll the same way again.

Halfway through The Girl from the Well, the scary factor did die down a little in place of plot and whatever it is that Tark and Callie were doing. I found Okiku more concerned about their well-being than going through her vengeance-driven existence, which, I suppose, was a good thing for a ghost who’s lived nothing but doom and gloom for three centuries. It did, in my opinion, get into some boring moments. I loved Tark’s personality, even when he was emoing for the first half. By the second, he’s kind of softened a bit and was more humorous, especially in his letters.

Callie, on the other hand, kind of bored me later on. After my initial amusement and fondness of her in the first half of the book, once the whole Smiling Man thing was over with, I thought Callie pretty much just faded in the background as a character. Plus, she was kind of clueless near the end there. Then again, most of the miko were kind of careless with regards to Callie’s presence, so the bit at the end can be blamed on both sides.

The writing style was the only other thing that I had a love-hate relationship with. Occasionally there were moments where things get fragmented into a stream-of-consciousness form. Sometimes this worked stylistically. Most of the time I was just annoyed that it broke apart a sentence that didn’t need to be formatted that way. There were also many times where the narration switches from a third limited to a first omniscient within the same paragraph–sometimes the same sentence! I’m chalking this up to Chupeco’s experimental writing style, so I didn’t mind it so much. The stream-of-consciousness stuff, though, I kind of did (but again, I have a bias against that type of writing).

Overall, I liked the book. I finished it in two days, and would have finished it in one, but I remembered I needed to eat and do chores as well. Yeah.

3.5 cookies! In any event, I heard Anna Dressed in Blood is worth a read in terms of vengeful ghosts. Thoughts on that? 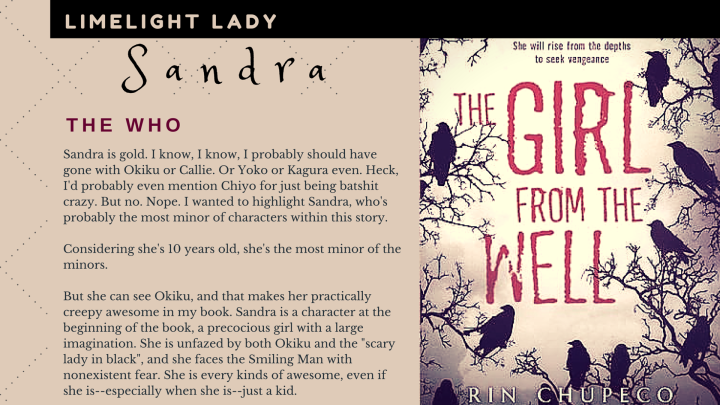 8 thoughts on “Review: The Girl from the Well by Rin Chupeco”

My February @owlcrate came with a MISTBORN bento box and I. Am. Frigging. EXCITED. Those Throne of Glass cards are gorgeous, too. They go well with my ADSOM pack of cards. :D #owlcrate #bookstagram #bookpics #bookswag #bookish #books #allthestarsandteeth #adalyngrace
Once upon a time, @megggriffin and I were asked to review this baby and we did. And we enjoyed it. And we shared our love. And OF COURSE it's another Cinderella tale, but you're talking to someone who enjoys fairy tale retellings, SO REALLY WHO ARE WE KIDDING? I can't wait to read it again in print. Thank you so much for the copy, @unspunfairytales ! #thestepsisters #madinapapadopoulos #cinderella #fairytaleretelling