“Are you happy with your life?” Those are the last words Jason Dessen hears before the masked abductor knocks him unconscious. Before he awakens to find himself strapped to a gurney, surrounded by strangers in hazmat suits. Before a man Jason’s never met smiles down at him and says, “Welcome back, my friend.”

In this world he’s woken up to, Jason’s life is not the one he knows. His wife is not his wife. His son was never born. And Jason is not an ordinary college physics professor but a celebrated genius who has achieved something remarkable–something impossible.

Is it this world or the other that’s the dream? And even if the home he remembers is real, how can Jason possibly make it back to the family he loves? The answers lie in a journey more wondrous and horrifying than anything he could’ve imagined—one that will force him to confront the darkest parts of himself even as he battles a terrifying, seemingly unbeatable foe.

A Barrelful of Multiverses

I mean, honestly, Crouch mentions Schroedinger’s cat, uses the same philosophy to describe a box of infinite worlds, and then actually displays worlds upon worlds and several multiverse scenarios that stem from the littlest choices. What was there to not love about this book?

Where normally I am not big into heavy science fiction philosophical readings (you know what, I’ll just make it a blanket statement and say I’m not big into heavy philosophical readings) in my fiction reads, Dark Matter I didn’t mind so much. Instead of the time travel craziness I normally tend to expect when it comes to traveling through my science fiction reads, Crouch took it to a more multi-dimensional level: he uses space as opposed to time. Now, that hardly means that Crouch doesn’t employ time; it just means he uses it to branch off the worlds, not so much as a destination point. Which makes Jason Dessen’s journey extremely profound.

Jason’s a physics professor in a Chicago university, and he’s got a pretty satisfactory life. He and his wife have mediocre but otherwise decent careers and a relatively happy family environment. Sure, if Jason hadn’t committed himself to Daniella so early in his college years, he could have been more than just a physics professor. Sure, if Daniella hadn’t decided to marry, she could have been a well-renowned and successful artist. But such is life, and the turning point decisions leave both Jason and Daniella with few regrets but otherwise satisfied outcomes.

Up until Jason gets kidnapped, taken to a warehouse, and wakes up hours later in a world he hardly recognizes. Turns out that’s not all. Apparently in this particular Chicago, he’s not married, he has no kid, and he actually IS a big-wig physicist harboring a monumental breakthrough when it comes to traversing the multiverse.

Shit just gets weirder after that.

I’m not sure what else I should say about Dark Matter, because discussing the concept of the book means spoiling a lot of it. Suffice to say that I actually did enjoy the narration (I listened to an audiobook of this), and I had worried about what would happen in the end. A story with an infinite number of possibilities does get to be worrisome, especially when in all likelihood, most of those possibilities end up BADLY for the protagonist. But don’t worry. Somewhere out there, there’s at least one Jason who’s happy in the world, so I’m good with that.

That said, some of the book did make me raise my eyebrows as far as moving the plot went. (Please take note, these ARE potentially spoilerish.)

Amanda. That sub-arc kind of just…petered off into nothingness. I kind of wanted to see a better resolution with her, considering she was such an interesting character. Hell, I totally would have been interested in seeing “Amanda’s Adventures into the Multiverse.” Also, assuming we’re dealing with several multiverses, how was it even possible that not ONE scenario leads Jason into his world with Amanda in tow?

Dear Evil Scientist Dudes of Jason 2’s World, why are you so goddamn evil? I’m sorry, but they weren’t very believable. If they’d valued the information Jason harbored within the Box, then killing off Jason’s loved ones and then proceeding to torture him are NOT altogether very viable options. And how is it that an entire secret scientific organization is OKAY with all this shit going on save for ONE person? No puedo.

Because of how mind-blowing multiverses work, I did find the show of infinity a little more simplistic than usual. I did love that Crouch tried to address what I found problematic with infinite multiverses, but for the most part, the plot was dependent upon selective choices, when in reality–should this multiverse machine exist–EVERY choice makes way for a NEW outcome. Which means there should have been an infinite number of Jason 2’s in Jason’s world, but that never really comes up as an issue.

All that said, I’m still rating Dark Matter at my highest, because it really did get me thinking. I enjoyed listening to the audiobook. I was invested in Jason’s welfare. I scratched my head in wonder and confusion, I laughed at certain parts, and honestly, even with the problems I had with the plot in general, I had no issue listening to this book from start to finish.

Also, this now poses the idea that in some multiverse out there, I’m a successful author of fantasy and scifi. Or a pastry chef working in some Parisian restaurant. Or a touring pianist with a Viennese accent. IT’S TOTALLY HAPPENING SOMEWHERE, YOU GUYS.

5 out of 5 cookies! (On a slightly unrelated note, WHY is the Goodreads quote page for Dark Matter only filled with the deeply profound quotes? Frankly, I was more amused by the funny ones. But that’s just me.) 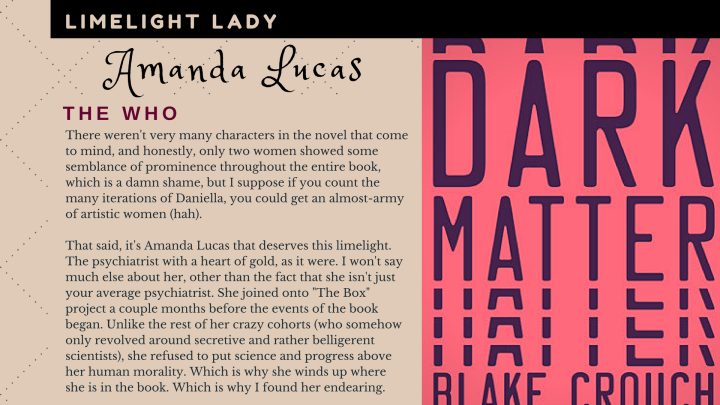